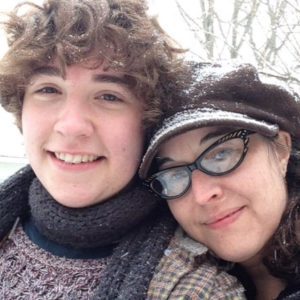 August was always a bold and curious child. In Kindergarten, he pulled the red handle on the emergency exit seat on the school bus because he “just needed to know what would happen.” In first grade, he rolled all the way home from school (a block and a half) because “it’s snowing!” When I gave him the sex talk when he was little older, I told him he’d probably be thinking about the opposite sex more and more and that was natural. He said, “Is it okay to think about boys and girls?” I knew then that I was raising an LGB kid.

I wasn’t afraid. I was proud of the way he looked at attraction and love with such a broad view. In fact, I was eager to parent such an open-minded kid. I rushed to my LGB friends and asked for advice: what did you need from your parent? How can I hope to get this right? Etc.

I was proud of myself for being open to being educated. I was proud of how supportive I was—how encouraging. Stupidly proud, because man did I have a blind spot. I didn’t include the TQ+ in LGBTQ+. It never crossed my mind that being trans or genderqueer could be part of his person. So in the summer before his senior year of high school, when he asked me to buy him a binder, I was shocked. I’d just sent this kid to prom in a dress Elsa would have had in her closet.

I proceeded to do all the wrong things:

When I said no to the binder, August said, “May I please get gender counseling?”  This made sense to me. Yes, now were getting somewhere. The counselor would say all the things I said, but since it wasn’t coming from Mom, he would hear it.

Three sessions in, I realized I was the problem. The counselor kept affirming my child’s questions, listened to him in ways I couldn’t, let him explore gender instead of trying to talk him out of it.

I also had to realize that August had been secretly exploring gender for a long time. He later admitted he had to be sure before he even asked me for counseling because he knew he’d have to accommodate my questions and my emotions. He couldn’t have done that if he were at all unsure. Very quickly after that, he asked the immediate family (me, my husband, and August’s younger sister) to call him August and use male pronouns.  But only at home. He wasn’t ready to come out to friends or extended family.

Calling him by a different name than the one we gave him at birth was pretty terrible at first. If I’m being totally honest, I still on occasion get terribly sad that the birth name has been discarded. Just try it; in your head, force yourself to call your kid the name you would’ve called him or her if he or she had been born the opposite sex. Do it for a whole day. It’s like you’re talking to a stranger. It feels wrong. It feels like you are betraying the truth.

When I finally began to reset my truth—it took about six months—and I saw my child’s true person (August. I have a son whose name is August), I’d look back on the child I thought I had, and it felt like she died. It’s a funky, ambiguous grief. There are no cards for it. No one brings you food. All at once I had both a sense of loss and of reluctant discovery.

Those first weeks and months were some of the hardest I’ve had as a parent. It felt like the universe had lied to me for seventeen years, and I’d bought that lie, and perpetuated it. I wanted to talk to my friends and family about my grief, my fears, my child’s worldview. But I couldn’t. Not until he came out. It was his story to tell. He needed to do it when he felt safe, and I needed to be the supportive parent when he did—not the emotional, uncertain, privately grieving mess I was. In fact, I was going to have deal with our family’s confusion and grief because their worlds were about to be shaken, too. They were going to look to me for answers and support.

What’s a mom to do when her support system is out of reach?

For me, the answer was PFLAG. Here were parents going through all the same things I was. It felt like a miracle that I wasn’t alone. Here was a place where I didn’t have to be the protective, stand-up parent. I could let my fears and turmoil loose on the room. I could cry and wail and say all the wrong things. I could also look around at the seasoned vets and see how they came through. I could look around at the allies whose presence affirmed that there are loving people in the community ready to embrace my kid and our family. And eventually I would celebrate my own coming-through.

Because here’s the thing. Here’s the part that matters: when August came out to himself, he was freer and happier. When he came out to his immediate family, he was even freer and even happier. When he came out publicly to his school—which fully supported him—he was truly free. All of a sudden my sullen, introverted, stinky kid was out of his room, out with friends, laughing, showering, and even speaking at rallies—asking his community to stand up for his rights because he was too young to vote and he was counting on us to do right by the LGBTQ+ community.

So on those days I grieve the child I thought I had, I’m bolstered by all the wonderful I see in August, the kid that was there all along, hidden or trapped or both but who is now no longer living a lie.

If I could go back and talk to that curious kid on the bus who pulled the red handle on the emergency exit window and who rolled home from school and who asked if it was okay to have crushes on boys and girls, I would open my eyes and heart to the possibility that my kid could be trans. I’d talk to him about what it is that makes a girl a girl and a boy a boy. I’d invite him to explore gender more freely. I would try to more boldly walk through my fear of the ways the world might marginalize my kid because I never wanted my kid to feel like he had to live a lie. And because I would so love to look back at pictures of him and see the whole truth.

As parents we’re bound to make mistakes no matter how deliberate or careful or loving we are. And though I carry guilt for having a blind spot into my child’s life, he doesn’t hold it against me. He’s proud to be transgender. He’s happy to be out and to be supported.

One last thing: When August came out, his grandparents rushed in to hug him, to love him as they always had, to fully support his transition. I think about the experience August and my parents would have been robbed of had they not been a part of August’s transition. I saw the best in my parents that day, and August did too. And now they get to have years with August. I’m so thankful they’ve all gotten to know him.