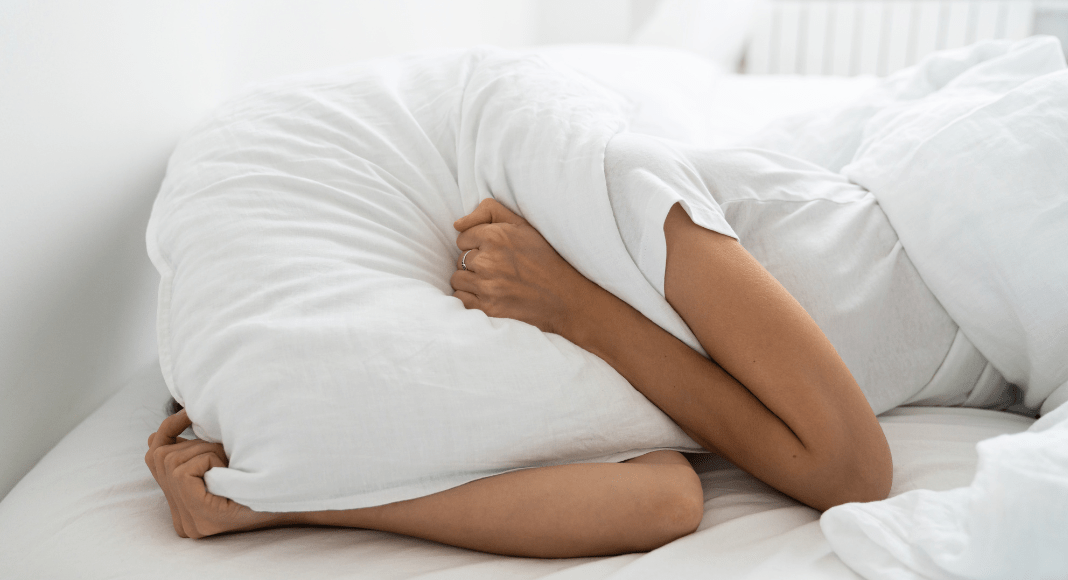 My most recent panic attack was caused by nothing. Well, not nothing, but something minor. My almost one-year-old bumped his head on the doorframe, resulting in an instant blue welt complete with a scrape across his perfect little forehead. It was my fault. At least, that’s what my anxious brain told me. I was trying to protect him from hitting his head (Cue Alanis Morissette) on something in the bathroom, so I grabbed his hand to escort him to safety when BAM! His face met the doorframe. He burst into tears, and so did I.

My 2.5-year-old rushed into the hallway and shouted, “What happened?!” She learned this from me. I’ve messed her up already, my relentless brain said. My husband swooped in and consoled our son because my frantically holding an ice pack to our baby’s head apparently wasn’t soothing to him. Then my husband was late for work, again, my fault. I should have handled this better. I shouldn’t be a burden to my family. Why can’t I just be cool in moments of pressure? Why am I always a pressure cooker waiting on a release?

In all fairness, I had a frustrating and stressful few days leading up to this point. I had spent hours planning, prepping, and cleaning ahead of my son’s first birthday party. My daughter had a virtual first birthday party in December 2020, and that was for the birds. My husband and I plastered on smiles for a Zoom call with our family and made it work, but it freaking sucked. I was ecstatic to finally be able to host a party for one of my children where Covid wouldn’t limit the guest list and plans.

I was so focused on asking people to send good vibes for good weather (because our house could never accommodate the number of family and friends who were planning to attend) that I didn’t even think about what would happen if one of us got sick. And then the night before the party, my husband didn’t feel well. I had a good cry/tantrum in front of my mom and in-laws. We pressed on with the cleaning and party prep, hoping my husband would feel better after some rest. Then at 1 am, right as we were finishing the balloon arch, my 2.5-year-old woke up with a fever of 103°.

OK, the party was definitely canceled now. I gave her some Tylenol and rocked her until she was calm enough to return to bed. Then I proceeded to clean up the evidence of a party DOA. And I cried some more. I cannot remember ever being invited to a party that was canceled the day of because someone was sick. This kind of stuff only happens to me. Why does the universe not want my family to be able to spend some freaking happy, quality time together?

Maybe that seems dramatic, but I failed to mention that Covid also prevented me from seeing my premature nieces for the first five months of their lives or giving my sister a hug when she was navigating life in the NICU and then adjusting to life in isolation with two babies at home. And on top of that, my therapist moved and couldn’t tell her clients where she was going because of a non-compete clause. Perfect timing, right? Seriously, I thought the universe would throw us a bone here and let us truly celebrate something in our family without fear of health consequences. The pressure was subsiding. Well, it turns out my little family of four had strep throat. So, we made the right decision to cancel the birthday bash, there’s no doubt about that, but I still hadn’t let it all go when my son hit his head on the doorframe. That was the boiling point.

And so I went to a place I’ve become all too familiar with recently. A place of hopelessness, failure, guilt, and loneliness. I know in the grand scheme of life that canceling a one-year-old’s birthday party does not matter, but I am still not okay and sometimes feel like the pressure builds up. Maybe that makes me crazy, or maybe it makes me relatable. Either way, it’s my truth. But I’m still holding onto hope that soon I’ll get to throw a party where family and friends will gather, eat, laugh, and watch as my kid smashes his face into a cake while my daughter “helps” him open his presents.